Situated up an unclassified road to the south of Pencelli this isolated building has its origins in the C7th and is dedicated to St Meugan a Celtic saint with scant written history. It has gone through a series of reconstruction phases ending in 1891 when a complete restoration occurred. The west tower contains a fine peal of bells which continue to be rung. There are nine yew trees with one at the rear over 9 metres in girth. During the C18 and possibly later the wall of the tower was used as part of a handball court. 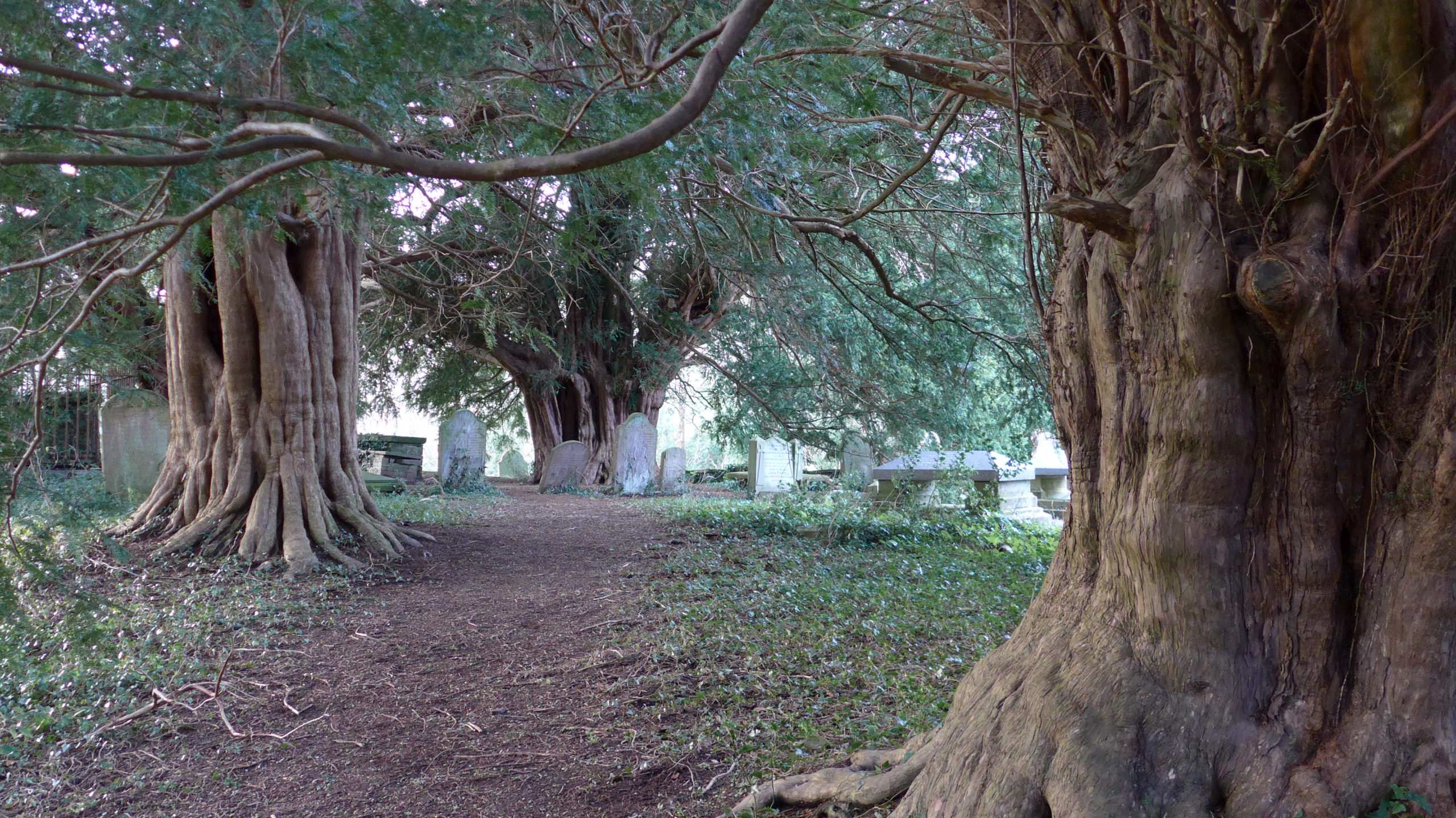 Situated in the upper end of the Caerfanell valley, known as the Glyn, also in the parish of Llanfeugan and having a problem of being several miles from the parish church, a chapel was built in medieval times to serve the locality and continued in use until 1948.  Only the foundations, several graves and a couple of Yew trees remain. 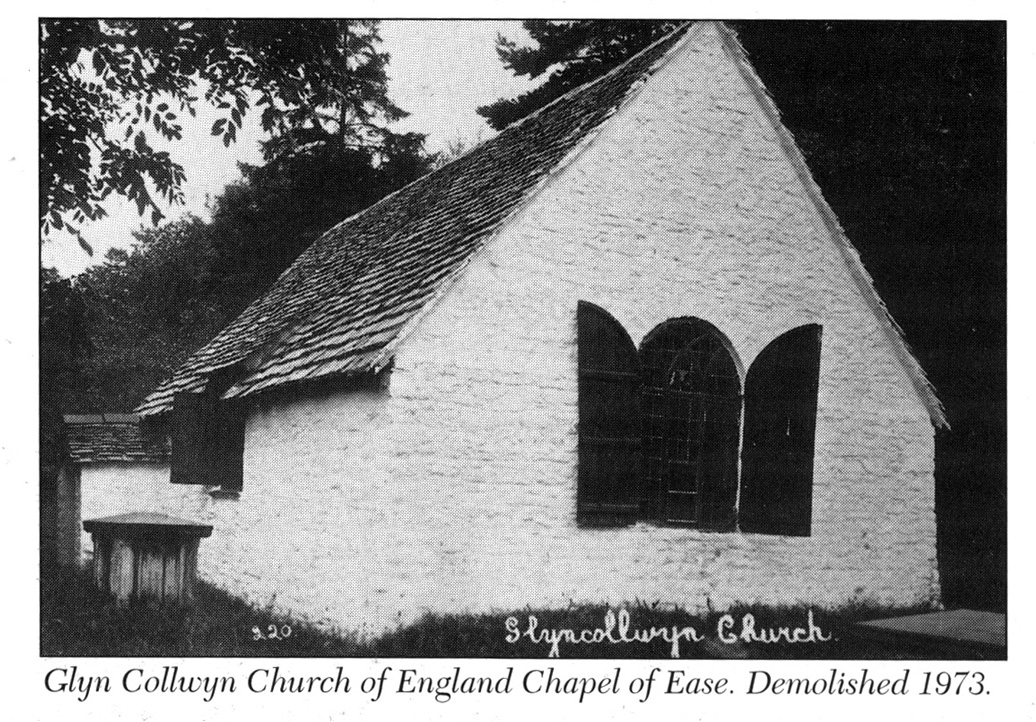 Due to the isolated site of Llanfeugan church and the vast size of the parish it was inaccessible to a majority of worshippers. To alleviate this issue a corrugated iron church was erected at Cross Oak approximately half way between Talybont and Pencelli 1878. 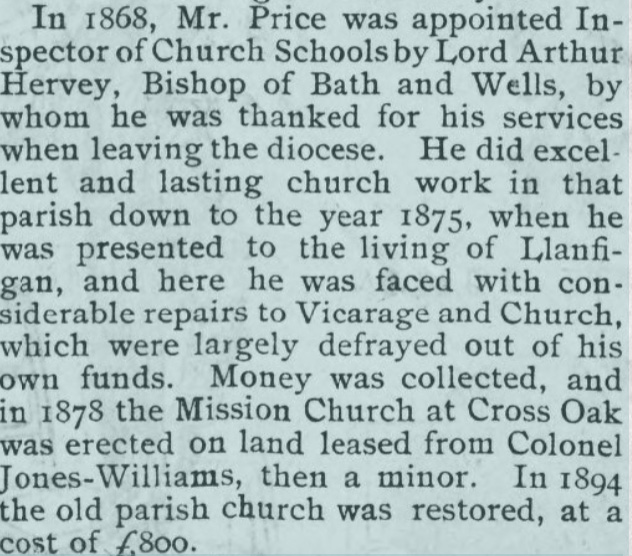 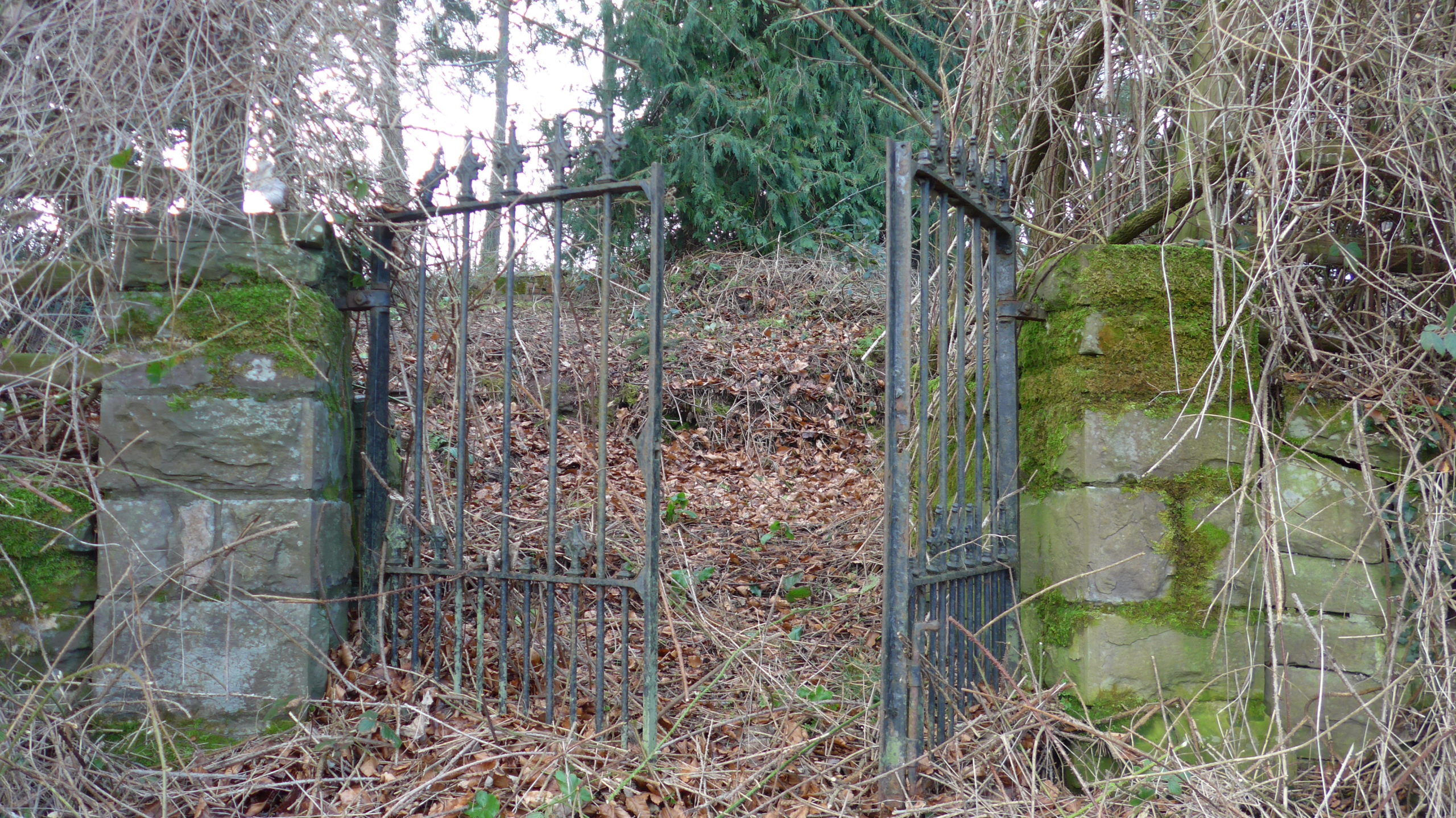 The only remnants of the Iron Church demolished in 1970

The church lies in isolation on the southern bank of the river Usk alongside the B4458 east of Talybont. The first reference to the building was in 1291. The setting, the elongated shape of the original churchyard and the fascinating inscribed pillar stone all point to an early medieval origin. It is a simple building with a Victorian bell cote at the western end. There is some disagreement regarding the saint to which the church is dedicated; the choice being between St Dedyw a relation of the legendary King Brychan, or St Tetta a C6th abbess of Wimbourne. On hearing that Charles 2nd had returned to Britain a Puritan Colonel Jenkin Jones allegedly fired his pistol at the church door – a hole remains to this day. An area of the grave yard has been given as the last resting place for the 310 ex-servicemen whose days ended at Crossfield House a British Legion care home. (now back to Buckland House) 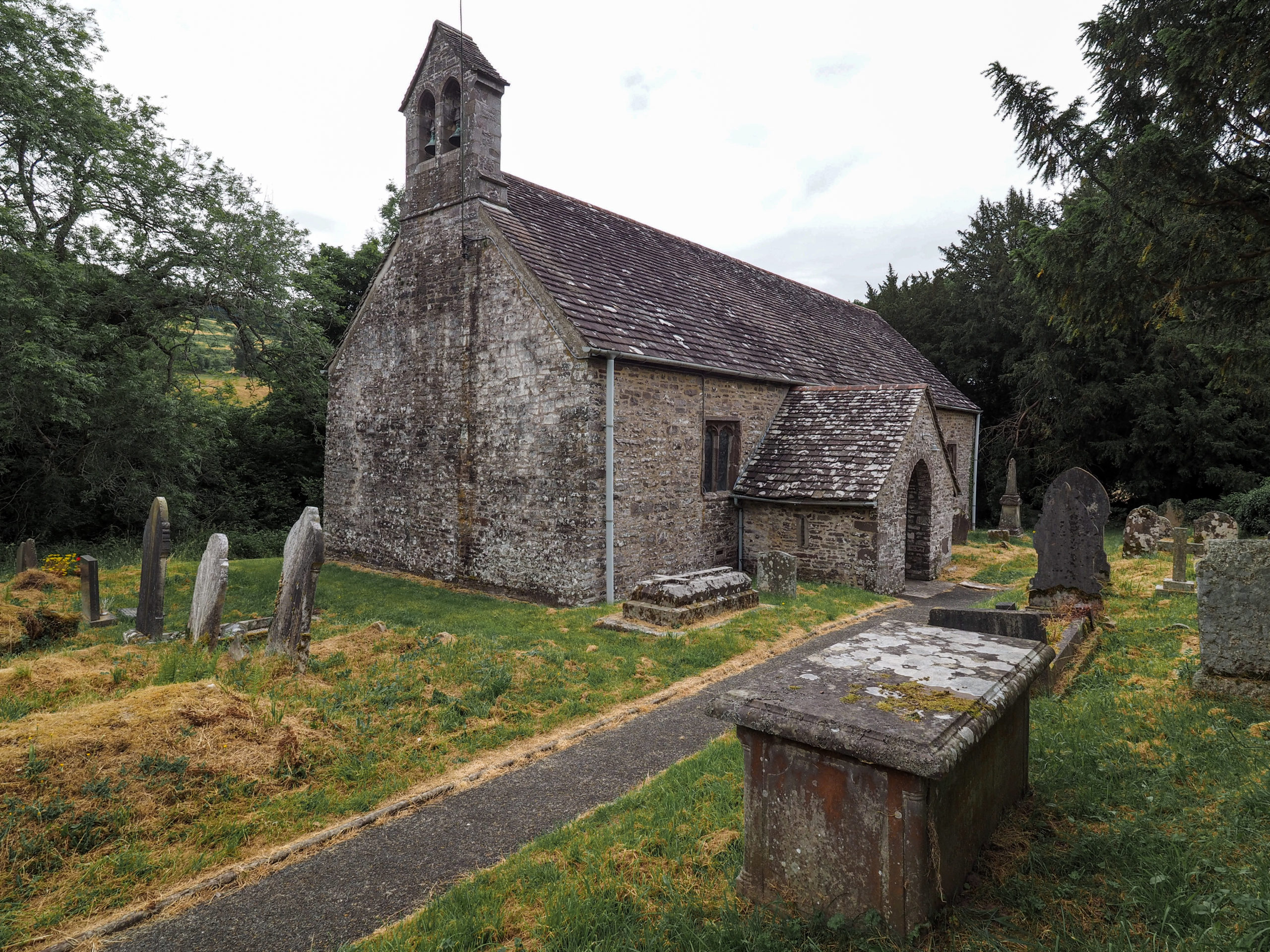 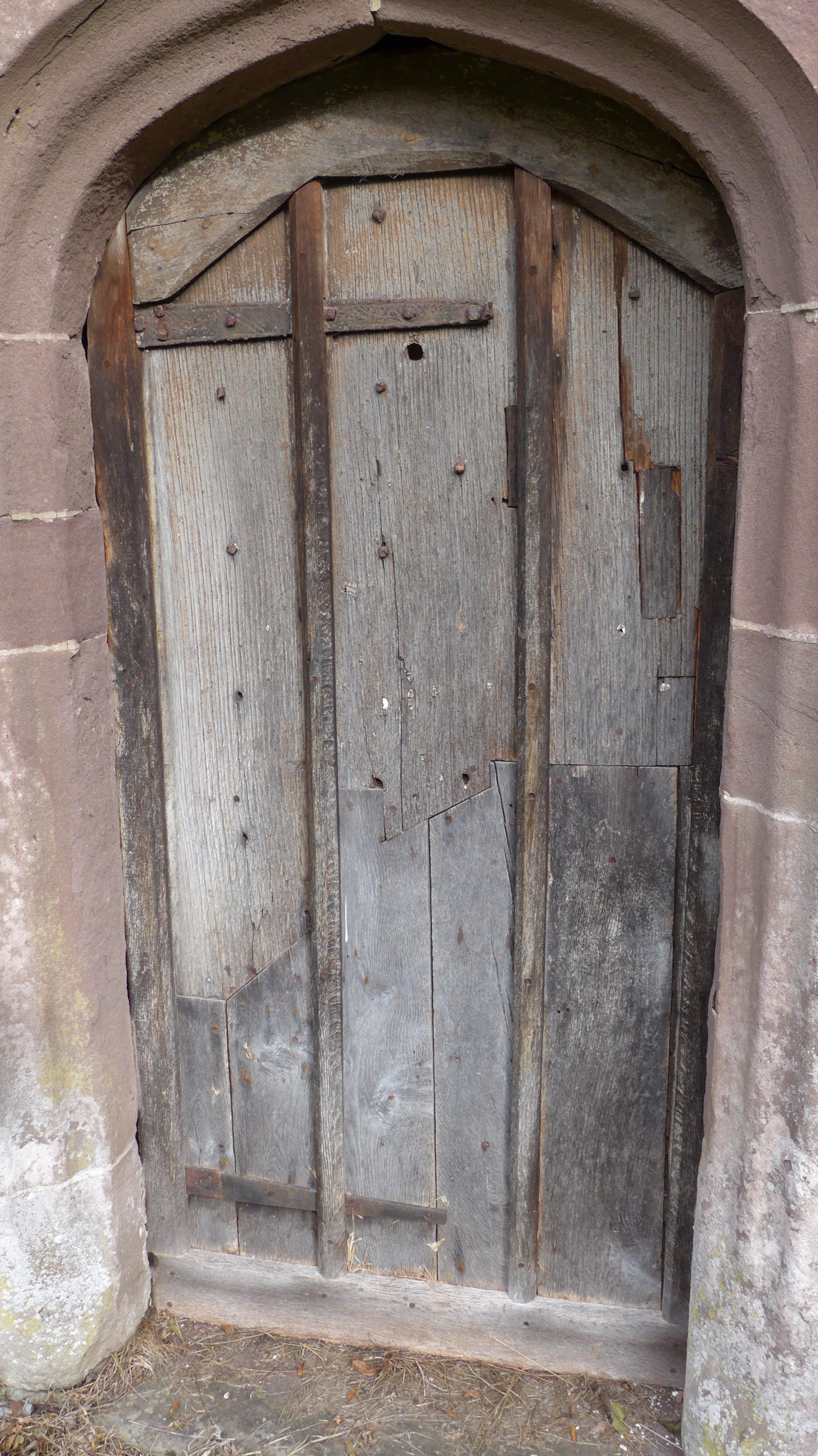 Llandetty Church with bullet hole in the door

The predecessor of the church, dedicated to St Ffraed (Bridget) of Irish origin in the C14th, began in the C9th with records of a rebuild in 1690. By the mid C19th the building was in a ruinous state and was completely rebuilt in 1884/5 paid for by Mr J P Holford of Buckland House. Behind the church is the grave of the celebrated metaphysical poet Henry Vaughan who died in 1695. 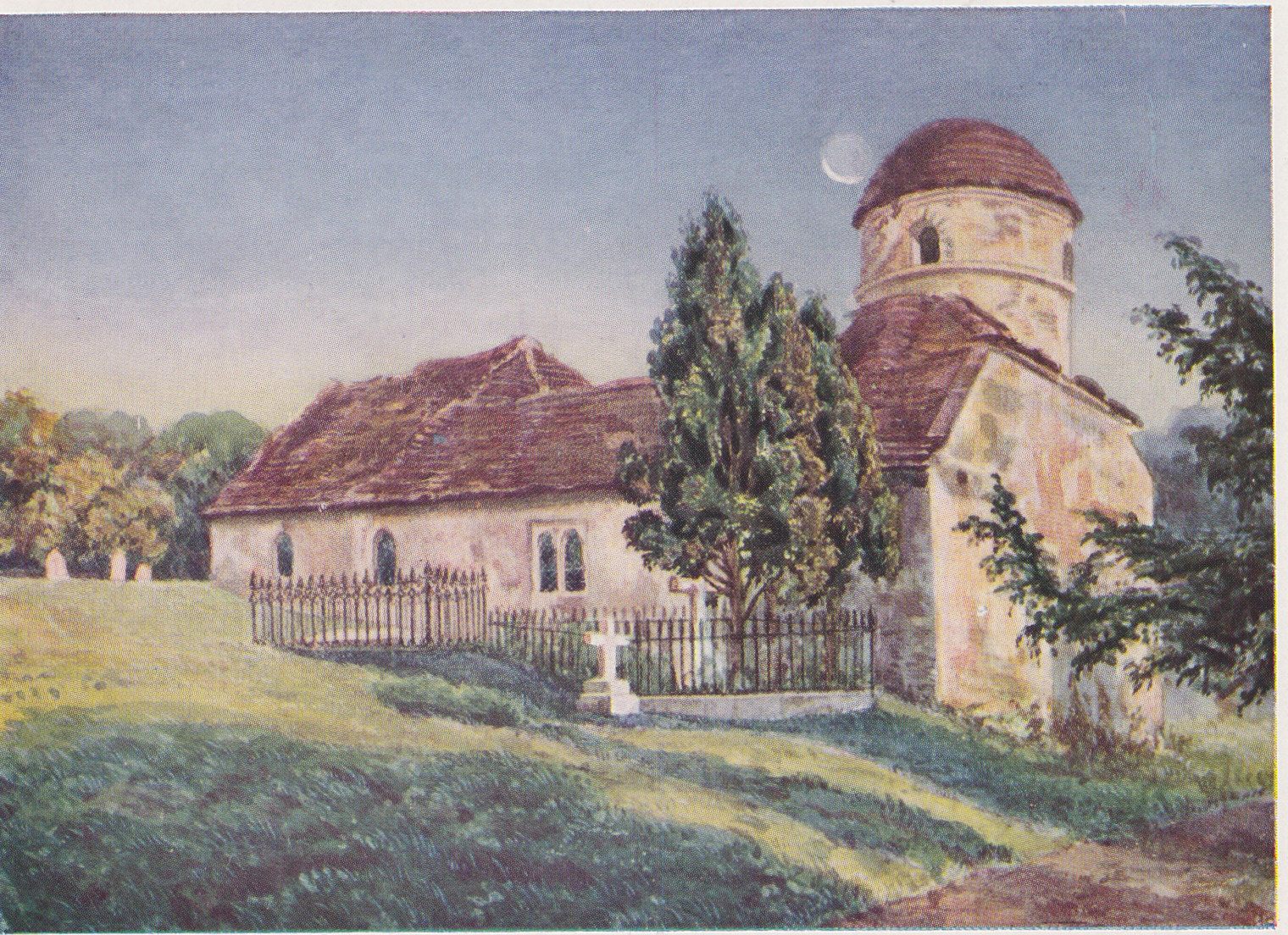 Painting of the old Llansantffraed Church 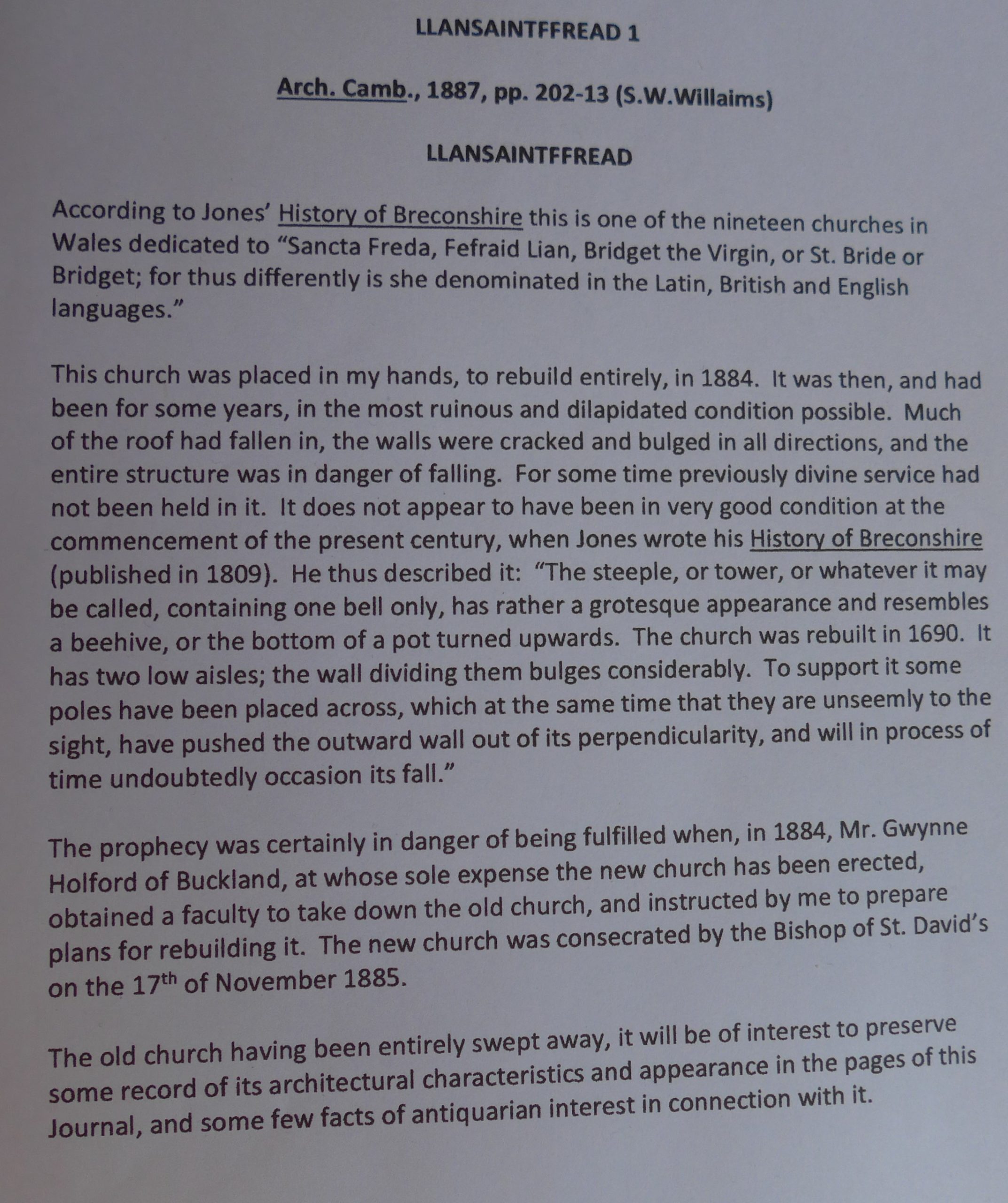 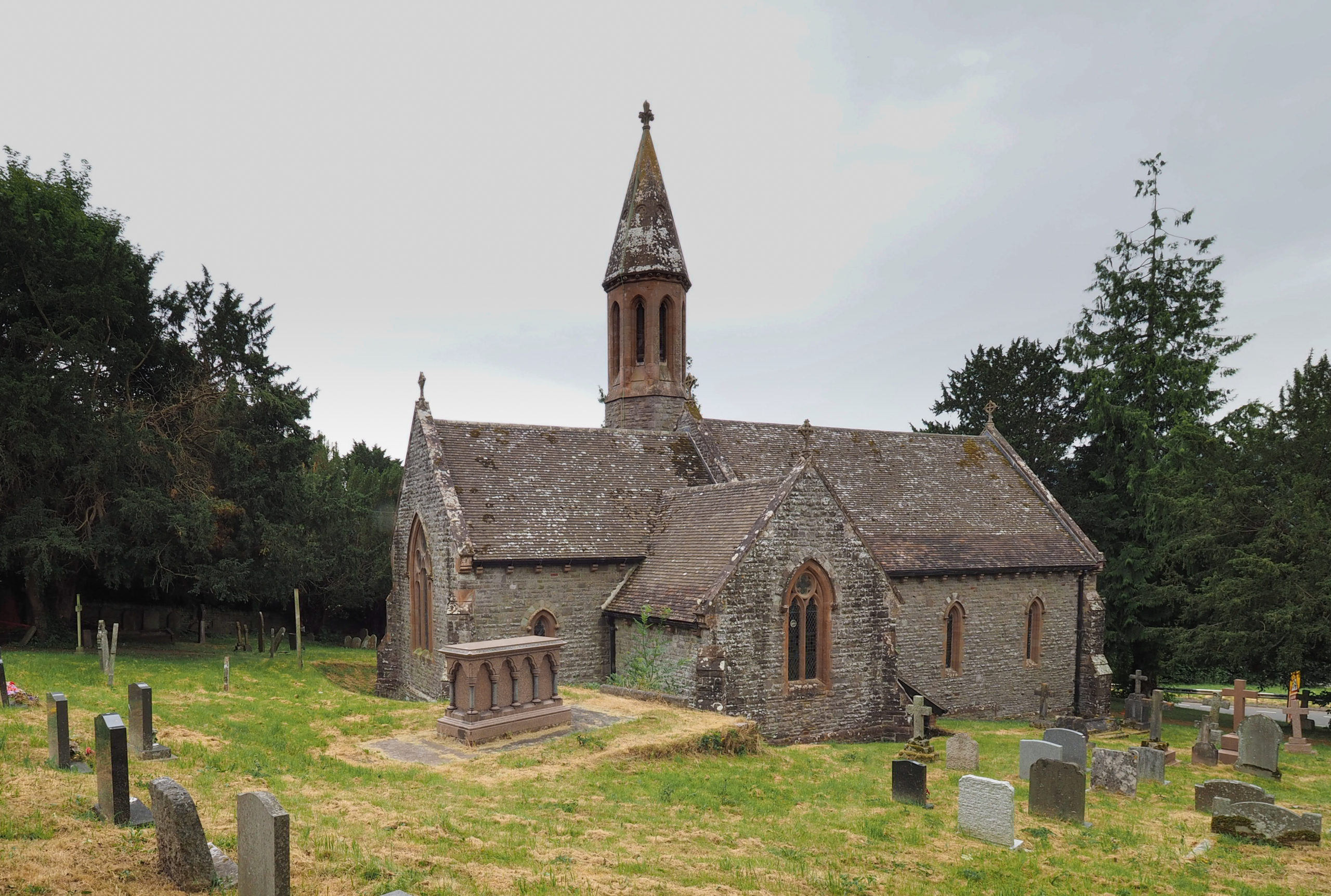 Prior to the Toleration Act of 1687 dissenters – Protestants who refused to follow the dictates of the Anglican Communion – were in danger of prosecution and had to meet in secret. The founders of Aber Chapel were Congregationalists that met in a barn at Danywenallt Isaf but by 1762 they were able to build their own meeting house. The chapel was rebuilt in 1838 and extended in 1876. The emptying and demolition of fifteen farms and cottages following the construction of the reservoir during the 1930’s drastically reduced the membership which in its heyday exceeded 160. Apart from the services the building was used as a school and for concerts. It remains in use today. 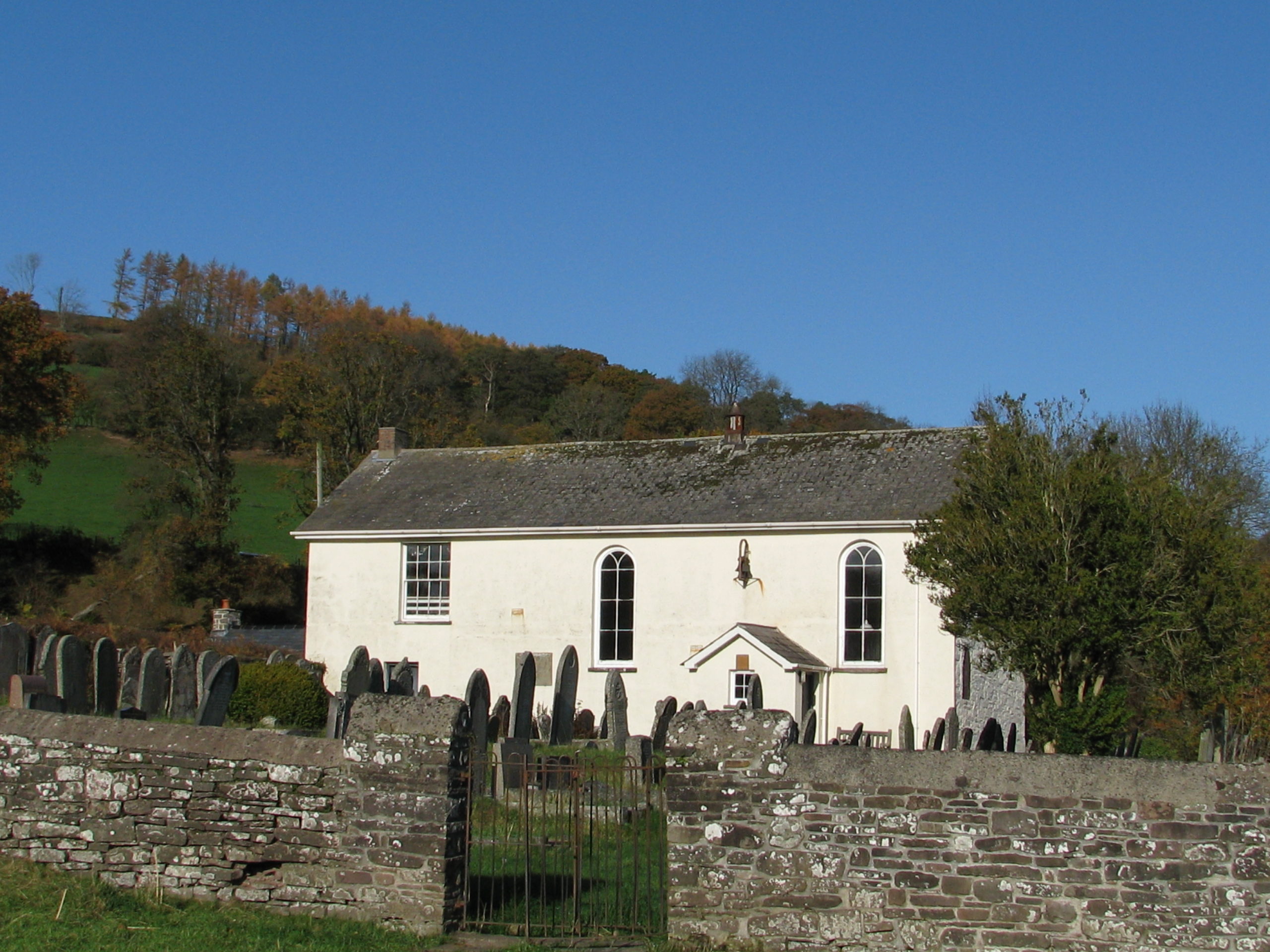 In 1830 a splinter group decided to leave Aber and open an alternative chapel in Talybont. By 1858 the rift was healed and the two rejoined under the same minister – the partnership remains today. No one knows why the chapel was named after Benaiah , a little known biblical figure, reputedly a commander in King David’s army and renowned as a warrior. Remains in use. 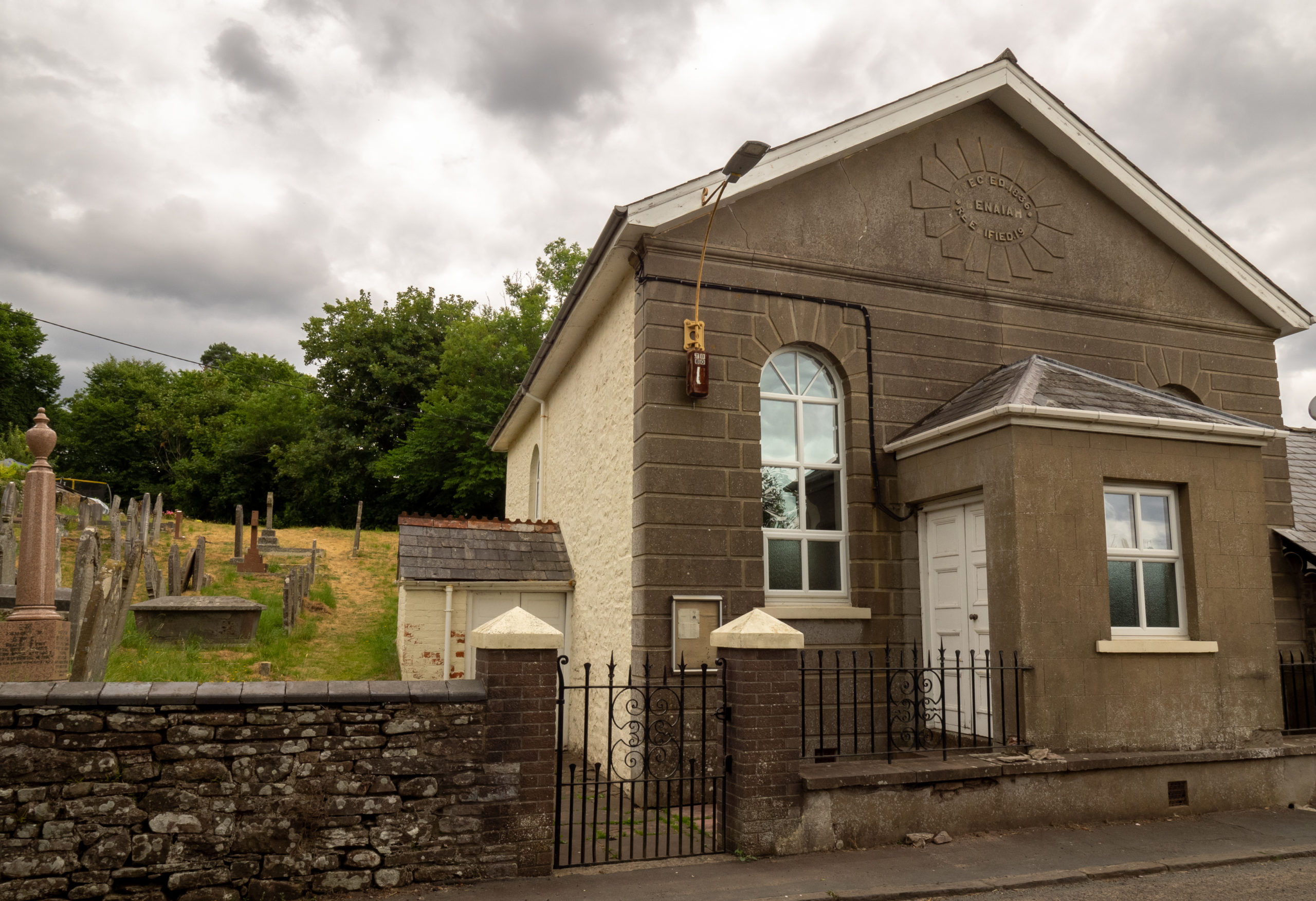 The building in Mill Lane dates from 1834 and was rebuilt in 1905. The chapel has been converted into a dwelling but the grave yard exists and is well maintained. 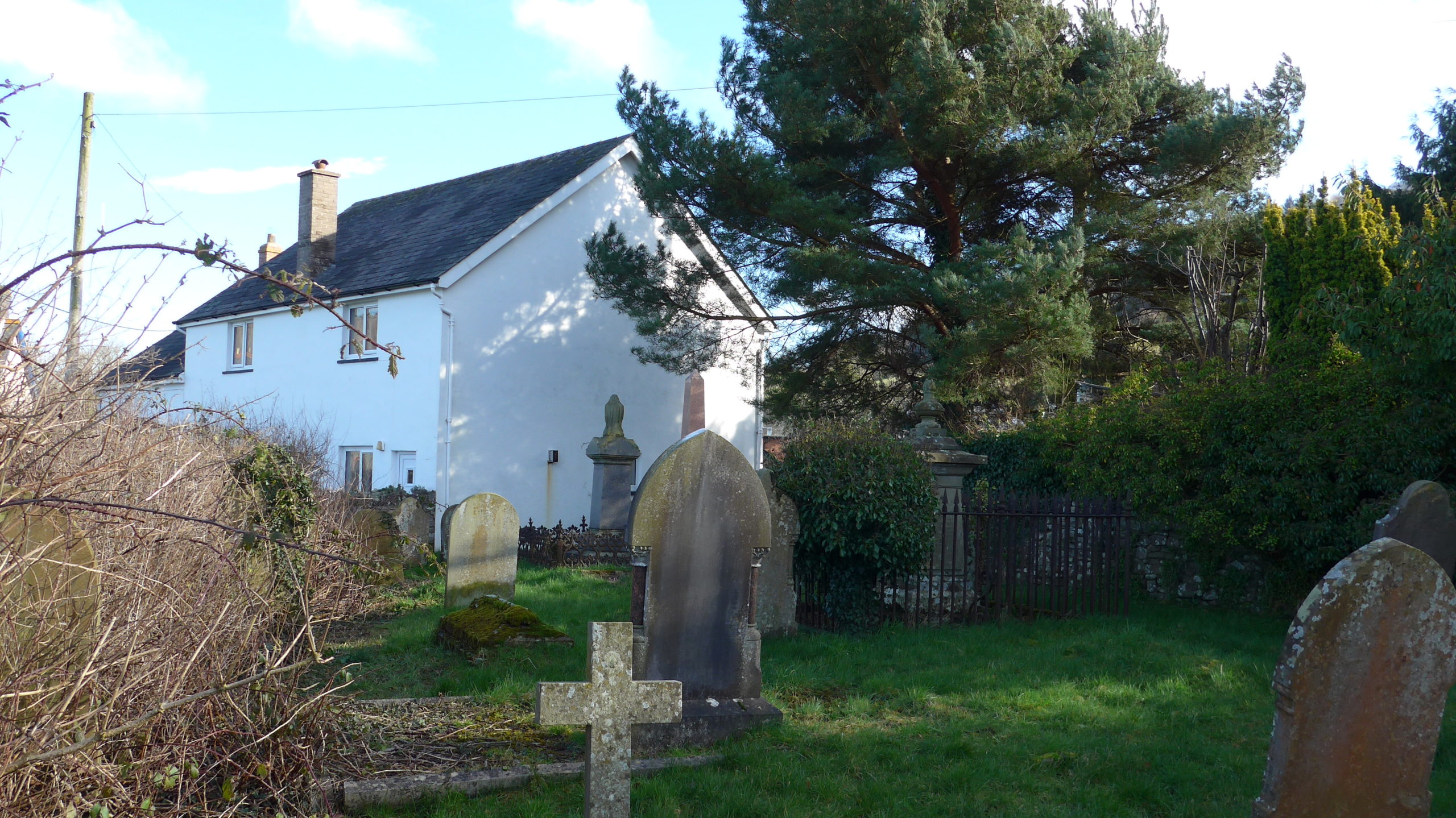 The building is opposite the Royal Oak and dates from 1858 in the vernacular style with a long wall entry. It is now a dwelling. 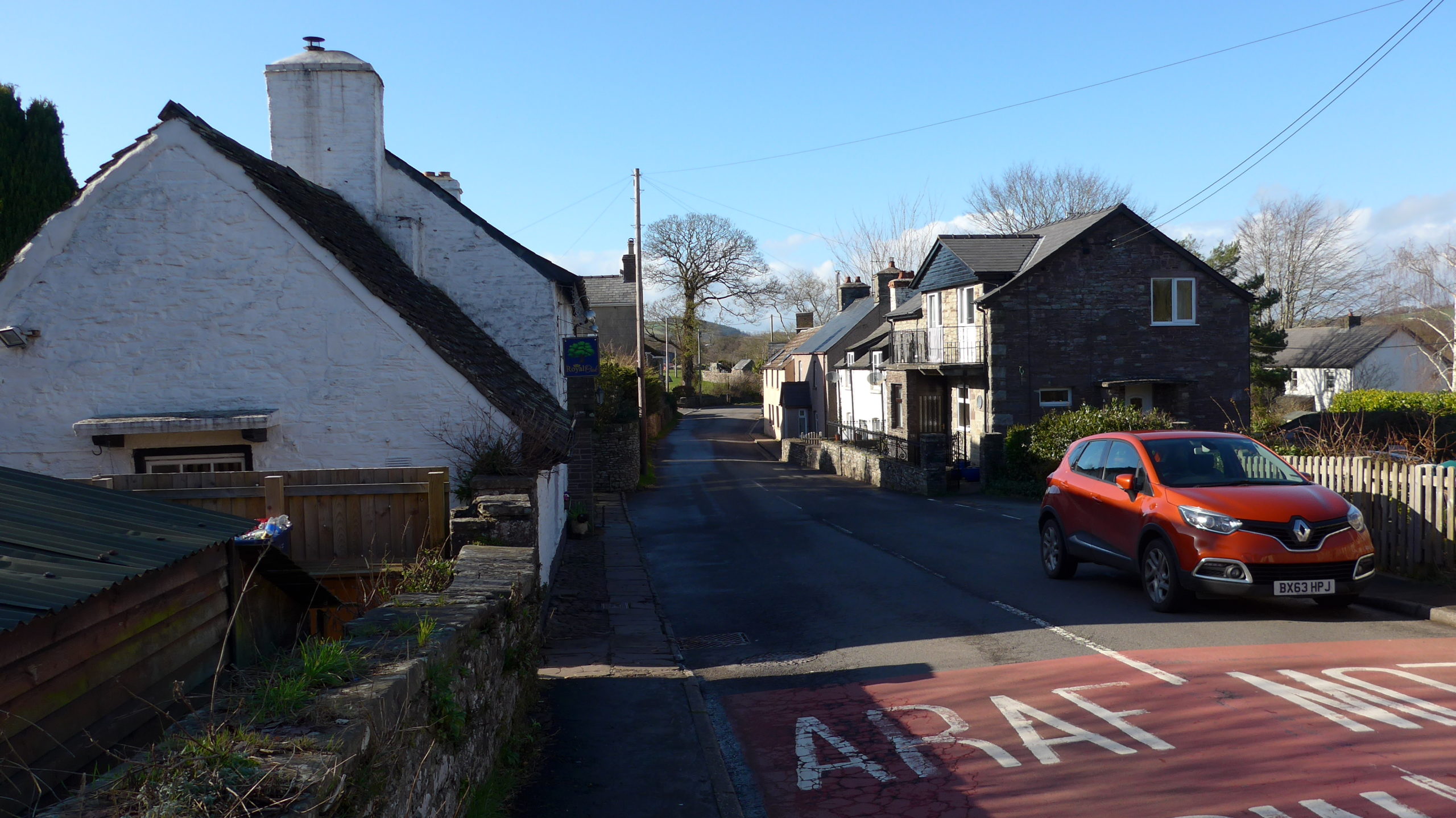 Peniel Chapel Pencelli on the right now a dwelling 2019

With none of the three established churches being within easy walking distance of the village, and the only alternative being the “Iron Church” a mile away at Cross Oak, a decision was made in 1911 to erect a corrugated iron building to hold services and events. It remained in use until 1970 during which time it became a versatile venue for meetings and entertainment. During WW2 an evacuated London school were taught there. As private cars became more common the old churches were accessible and, with the building of the Henderson Hall, it became redundant. In 1970 it was sold to Dulwich College to become the Wilson’s Outdoor Education Centre to be sold again in 2009. 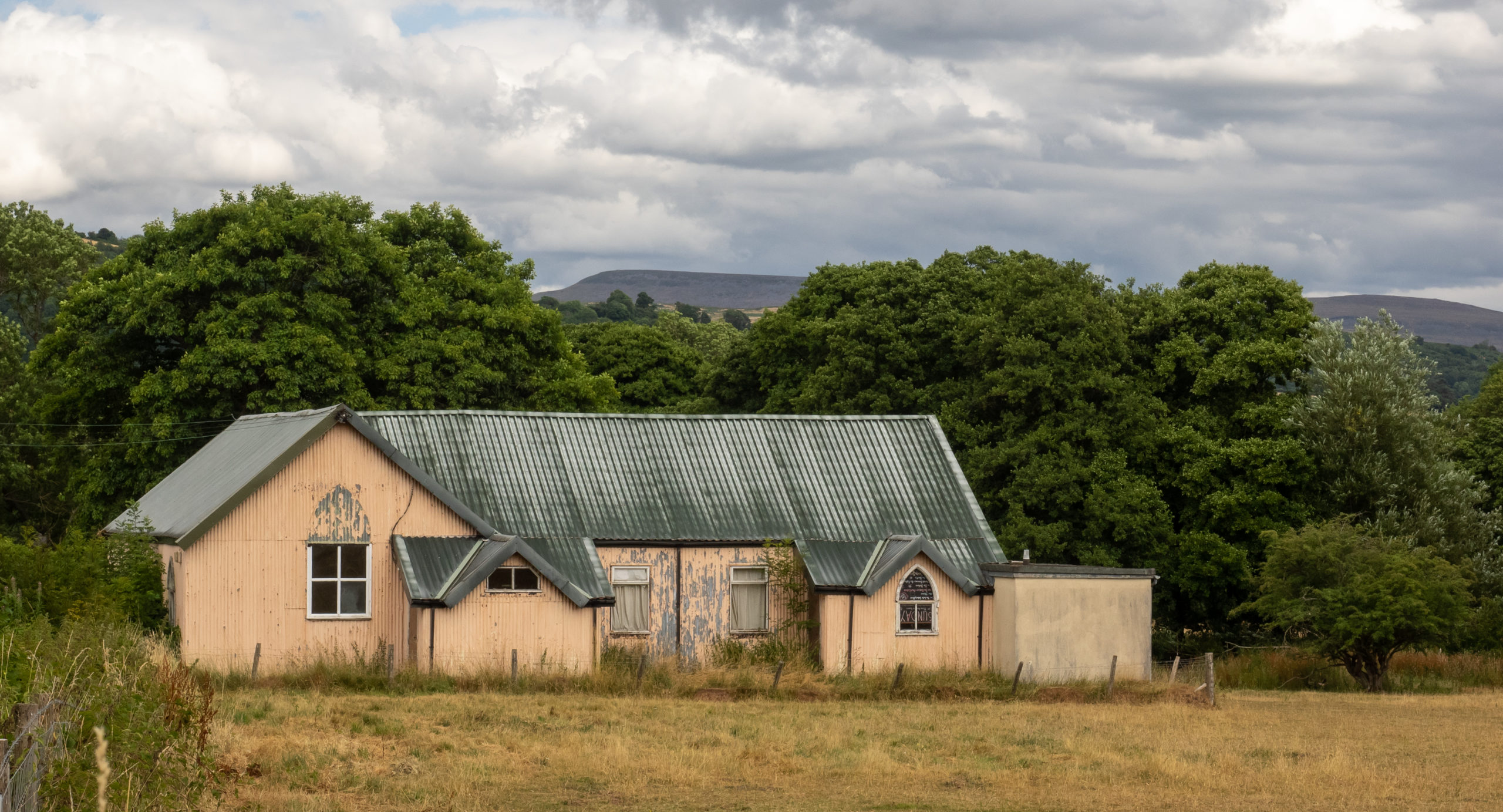 The Mission Church and Hall Talybont 2019